Don't Waste Our Future is a two year development education and awareness project directed at European young people and local authorities to raise awareness of topics around food waste and the right to food, in order to encourage young people towards more responsible models of consumption and development.

Working with the University of Glasgow, Keep Scotland Beautiful is the delivery partner for Scotland and has supported the associated research into the project with University of Glasgow researchers.   Pupils from four Glasgow secondary schools are taking part: Hyndland Secondary School, Shawlands Academy, St Paul's RC High, and Knightswood Secondary.

In 2015, pupils were supported to create statements for a draft European Food Waste Charter.  These draft statements were then brought to workshops held during the 2015 Expo in Milan, where pupils discussed them and identified priorities leading to a manifesto for action:THE DON’T WASTE OUR FUTURE CHARTER 2015 – A joint European Manifesto of Young People and Local Authorities to promote Food Waste Reduction and the global Right to Food”.  Suggestions raised by the young people in Milan reflected locally distinct opportunities and Scottish young people were able to make strong contribution to the discussions and comment on the viability of ideas in a Scottish context.  The young people from Shawlands Academy, Knightswood Secondary, St Paul's High School and Hyndland Secondary school attended as the sole representatives of the UK.  The development of this EU charter sits within a context of Scotland alone producing 1.4 million tonnes of food waste each year, 630,000 tonnes of which comes from our homes.  Most of this food waste could be avoided.

Putting the Charter into Action

After returning from Milan, pupils from participating schools worked with Keep Scotland Beautiful to identify key understandings and attitudes that would motivate people to reduce food waste.  Using these key understandings, pupils developed and delivered peer to peer sessions for pupils in their own schools and associated primaries.  They also devised options for a campaign to encourage food waste reduction which is being delivered by media company 999Design.

Young people from the participating Glasgow secondary schools presented the Don't Waste Our Future Charter 2015 at a meeting of Glasgow City Council's Children and Young People Policy Development Committee in October 2016.  They described the project framework and context and then presented a list of recommendations for action for the committee to progress. They then took questions from the committee members. We are looking forward to the results of these recommendations and how this Glasgow City Council Committee will respond.  Policy change towards reducing food waste would be very welcome!

The model used by Keep Scotland Beautiful supports learners to recognise, organise and manipulate their own knowledge and understanding; integrate new perspectives; identify connections and the impact of context; and supports the development of questions and observation.  This is a model that supports learners to become active, engaged citizens and advocates making strong contribution to their community on issues important to them.  At the same time, this links to wider national and global issues around food supply, fair trade and food security.

To meet the tasks of raising awareness and encouraging food waste reduction, the young people worked with delivery partners 999Design and Keep Scotland Beautiful to devise a campaign.  This campaign included different materials and contact points to reach people.  Here are two posters aimed towards different age groups that were selected from the range of designs for production. 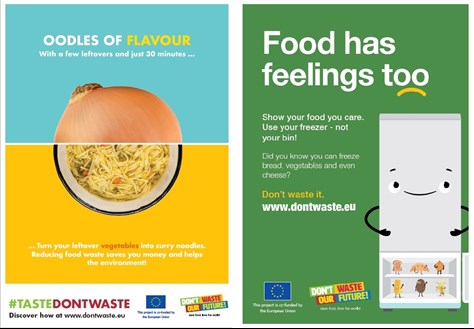 Read more about activities in other European countries, including videos from the Milan workshops, visit http://www.dontwaste.eu/