Start your own campaign

To find out more about deploying the campaign in your area please get in touch with us by emailing beach@keepscotlandbeautiful.org

As part of the My Beach Your Beach campaign, your dog can be a 'Bag it and Bin it' #DoggyAmbassador

Our 2022 search for #DoggyAmbassadors for the east and west coast is over!

Congratulations to Oscha from Irvine and Fin from Portobello!!

Our West Coast #DoggyAmbassador is Oscha, a five year old Golden Retriever from Irvine beach, who received 33% of votes.

Oscha’s owner Jennifer Pless said, “Oscha regularly joins me in litter picks as we try to keep the beach clean and safe for all to enjoy.” 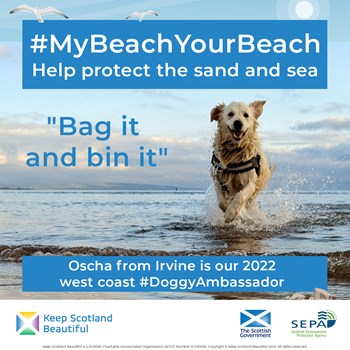 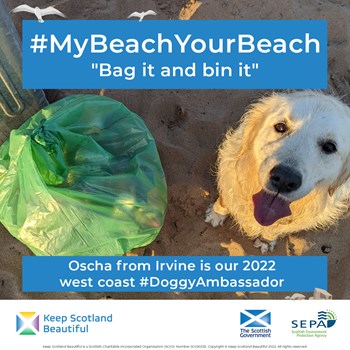 Our East Coast #DoggyAmbassador is Fin, a six year old springer spaniel, from Portobello, who received 27% of the east coast votes.

Fin’s owner Laura Keddie said, “Fin loves the beach, for the sea. He bolts straight to the water, it's almost impossible to get a photo of him dry. Our beach essentials are floaty toy, poo bags and a raincoat. We are delighted to encourage other people to be responsible like us. Bag and bin what doesn't stay in.” 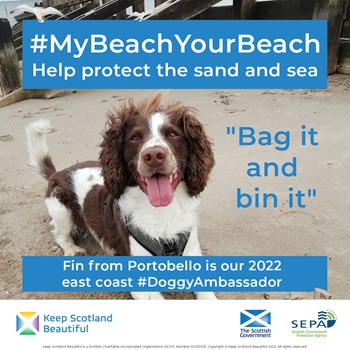 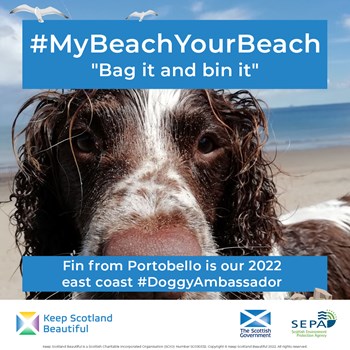 Thanks so much to everyone who was involved in the campaign!! 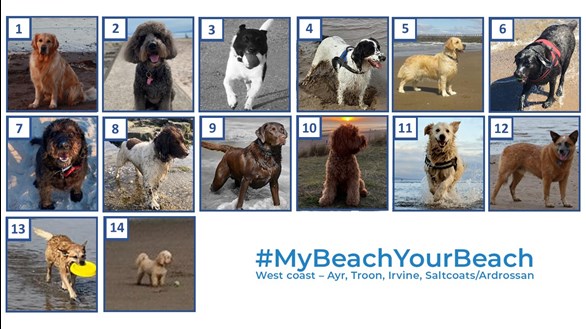 See some previous years' winners below:

We know that increasing bin visibility increases bin use.

Use these campaign posters to encourage responsible behaviours on the beach.

Protect the Sand and Sea (A4 poster)

Put your litter in the bin (A4 poster)

Don't feed the gulls (A4 poster)

Browse our campaign leaflets or contact us to request hard copies.

Supporter pack (for businesses and organisations) (A5)

If you're keen to take action for your beach, here's some suggestions and support:

Carry out a litter pick

Whether you're a beach local or a visitor, you can play a small part to help keep the sand and sea clean for everyone to enjoy. Join in a group litter pick, or do your own.

Head over to Clean Up Scotland for guidance and to get started.

Do a litter count

Another way you can help the campaign this year is by helping to track the amounts and types of litter on the beach and helping build both a local and a national understanding of the issue. This is vital for monitoring and for local campaigning.

Become a 'My Beach, Your Beach' business

Contribute to bathing water quality improvements at your local beach and help keep the sand and sea clean for everyone to enjoy!

Will you take the pledge?

As part of the 2021 Year of Coasts and Waters we created a classroom resource for S1-6 pupils to help them learn about bathing water quality in their area and reflect on why their local beach is worth protecting.

Looking to expand you understanding of all things 'bathing water'? You can find some more resource below.

Become a Cool Seas Explorer with the Marine Conservation Society, and learn more about our UK seas with these resources, activities and games.

What does water use at home have to do with your beach? Track the water cycle from raindrop to ocean and find out how the water you use at home is cleaned before it ends up back in the sea.