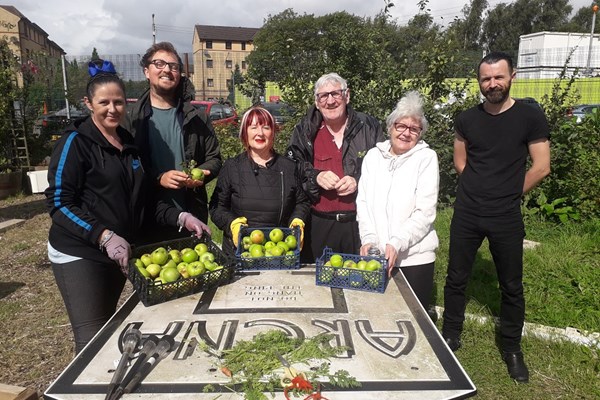 Queens Cross Housing Association provides a variety of activities to support the health and well-being of the local community and its’ tenants. It has three community Growing Space projects. Two are open community gardens and one is an enclosed space with raised beds, communal growing areas and a polytunnel. Horticultural knowledge is provided and shared at weekly, tutor led drop-in sessions during the growing season, as well as a Kids Outdoors sessions for the younger generations. The Association’s projects provide access to inner city green space, which can have a positive impact on well-being and enriches local biodiversity.

This growing space has a variety of options for people to engage with food growing strategies. There are 26 raised beds for people to tend to as individuals, and communal growing spaces and a polytunnel which are managed by weekly tutor-led drop in sessions. There is also a children’s growing area where younger people have a space to take ownership over during the weekly Kids Outdoors sessions where community volunteers encourage and share their knowledge and sessional staff provide creative and physical active play.

The weekly drop in sessions are also attended by people from other partner organisations such as The Richmond Foundation which supports people with a range of health-related needs. Getting outdoors and taking part in group activity in this ‘safe’ group environment is reporting to be greatly beneficial to these groups and also their support workers.

Produce grown is shared with the local community and also at an Autumn Harvest Get Together, held annually to celebrate with other groups.

This green space that peeks between the urban multi-storey flats, encouraging local residents to venture through the gate to taste the produce and get involved with growing. The flowers add colour to view from local windows and for passers-by.

Last year, after making a third entry in Its Your Neighbourhood, the group was delighted to achieve a Level 5 (Outstanding) award and to be presented with a Certificate of Distinction. This gives a great foundation level to maintain and build on.

Dundasvale is a close-knit community near the city centre of Glasgow, where local residents socialise together at the many clubs and activities that are held in the residents’ hall and bowling green which are next to the community garden growing space. This growing space is often referred to as ‘a wee city sun trap’ and certainly everything that is planted there flourishes! Banter is exchanged over the fence between growers and passers-by and produce grown is shared with the local community. St. Andrews Ambulance staff, who have offices locally, find it a nice place to come and eat lunch and have some breathing space amongst the pretty flowers.

2020 sees the first Children’s Growing area raised bed being installed. This was painted by a group of volunteers from The Princess Trust Youth Skills project with Glasgow City Council in February, ready to install for the growing season. The raised bed was built with a local recycling wood workshop called Boomerang in Maryhill. Some of the group’s growers are now attending Woodwork Classes there, where they learn how to build planters out of pallets and pick up other handy skills for growing projects. Boomerang Workshop helps the group with repairs and maintenance of all its growing space projects.

The Courtyard Community Café at Wester Common looks out onto the Courtyard Garden. It’s a small open growing space in the middle of multi-storey flats headed by two silver birches and a mischievous magpie. The gardeners here grow herbs and vegetables which are freshly harvested and available for use in the café kitchen or packaged neatly for the local community to try or to take home.

Outdoor seating was added in 2018 which extends the use of this space to be enjoyed by more people. Huge improvement works were completed in February 2019, with new planters and benches replacing those that were in disrepair.

This year the group is working to create a designated children’s growing area where the local youth groups can be encouraged to engage in growing activities and learn about biodiversity. The weekly tutored drop in sessions have now been moved to a time where parents and children can attend after school.