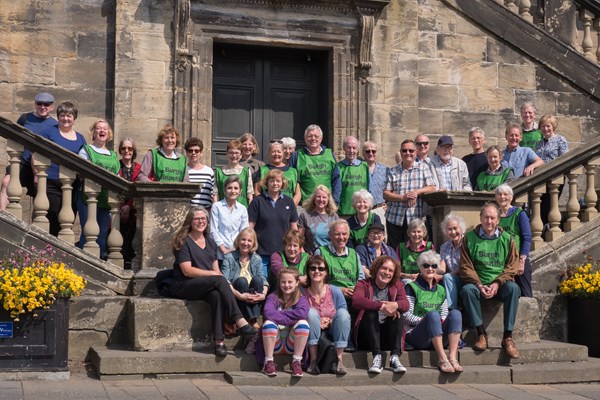 In 2022, Burgh Beautiful Linlithgow was one of two groups representing Scotland in the RHS UK-wide Britain in Bloom finals. The group won a well-deserved Gold medal in the Town category. Find out more.

Burgh Beautiful Linlithgow is an entirely voluntary group which creates and maintains all the town's public floral displays - 122 hanging baskets, 35 beds and 89 plant containers, mostly planted all year and including those formerly maintained by West Lothian Council. The group has an extensive tree planting programme including a Street Trees Project; maintains wildflower areas and orchard trees; and directly promotes public art. The group works extensively with community gardeners, youth organisations, other community groups and schools, and raises most of its funds through sponsorship of floral displays by local businesses, groups, families and individuals.

In 2021, Burgh Beautiful Linlithgow were joint winners of the Community Horticultural Award: The many areas managed by Burgh Beautiful Linlithgow are exemplary. The way the group divided duties in response to the restrictions of the pandemic were inspirational, and clearly showed their motivation and desire to keep the town looking at its best.  Community gardens were amongst the best the judges had ever seen.

In 2021, the group also won the VisitScotland Award for Tourism: Tourism is becoming very important to Linlithgow's local economy. Burgh Beautiful, assisted by its parent body, The Linlithgow Burgh Trust, has sought to publicise and widen the offer to tourists and locals through the production of a ‘Floral Trails’ booklet, for free distribution through local outlets; by marketing the town as an exemplar for floral displays and other environmental work, through print and online media; and, most notably, has delivered three magnificent new bronze sculptures to the townscape since 2018.