The Cup Movement will tackle our litter culture head on

By the law of averages, a fair proportion of people reading this will be doing so with their favourite coffee or tea, and a good number of them will have purchased that cuppa from a high street beverage outlet. And most of those will be drinking, right now, from a takeaway cup that is very likely only ever to be used once.

As our “coffee culture” has blossomed, so has the number of single-use disposable cups used in Scotland - now 500m every year. An extraordinary 96% of those cups we use are never recycled, a remarkable and shocking indictment of the way we all too often consume irresponsibly.

Something needs to change, and I’m delighted that the City of Glasgow is leading the way.

Glasgow is Scotland’s largest city, famed for its culture, history and people. It’s people have a long established culture of working together to deliver change. It’s therefore a great place to launch the Cup Movement, particularly given that that approximately 95m single-use disposable cups are used annually in the city. It will offer innovative solutions to tackle the challenges posed by single-use disposable cups.

The Cup Movement in Glasgow - delivered jointly by my charity Keep Scotland Beautiful and Simply Cups - will be built from several interrelated initiatives, focused on changing behaviours, transforming recycling infrastructure and gathering vital evidence to inform future strategy and the decision-making of partners and stakeholders. It’s a flagship initiative, designed, developed and delivered collaboratively with the public, private and third sectors. 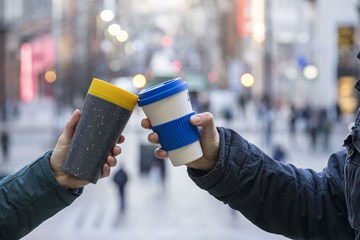 Across the city, we will be bringing public organisations, businesses and communities together to tackle the challenges posed by single-use disposable cups. We’ll be working to strengthen recycling infrastructure so that when a takeaway cup is the only option, everyone should be able to ensure that it is properly and professionally recycled.

We’ll also be explaining that there are alternatives to the automatic use of single-use disposable cups, promoting to consumers the benefits of using one of the the wide range of reusable cups that are available. Finally, we’ll be working all over the city to change the behaviour of those who choose to discard single-use drinks containers irresponsibly - tackling our litter culture head on.

Quite rightly, national and local government is focused on this issue - we’re delighted to have both Glasgow City Council and the Scottish Government backing the Cup Movement in Glasgow. Speculation about a “latte levy”, or an additional small charge for those choosing to use a single-use cup is an indication that there is a growing political focus on this area of public policy.

However, we believe that the Cup Movement in Glasgow can be a trailblazing initiative that will trigger positive action and changes in behaviour across the country, as the first integrated behaviour change and single-use cup collection initiative in Scotland. As local and national government consider the next steps, we’ll be taking action on the ground and collecting vital evidence to inform future strategy and decision-making.

We’re delighted to welcome the support of all the major chains and outlets and are delighted that so many independent and other distributors are now stepping forward to join our movement for change. Employers are also showing real leadership in working with us to host onsite recycling facilities so that, eventually, everyone will have the choice not to throw that cup away.

Glasgow is once again taking the lead and starting the process. It’s now time for the whole city to consider what they can do to help change single-use behaviour for the better.