Our citizen scientists are ready to make waves for Upstream Battle

Our Anchor Group training nights have come to an end, and our 16 groups are now fully equipped to survey and help clean up the River Clyde.

We wanted to find out what our citizen scientists got out of the training, how they will use it, and how they will change behaviour in their communities.

Friends of Dumbarton Foreshore are the fastest litter-pickers in the West! We clean outwards from Dumbarton Rock, ancient seat of Scotland’s kings.

As a social enterprise, aside from their other manifesto aims, Society Zero's work involves community action and empowering people.

Why did you get involved in the Upstream Battle campaign?

Society Zero: My group got involved in the Upstream Battle campaign to learn more about the litter we see so much of and to find out how it ends up in our oceans and waterways.  It also gives us the opportunity to encourage more of our community to get involved with us through our litter picking events and meet others on the same journey too.

Friends of Dumbarton Foreshore: I studied Marine Biology at Glasgow University and know that scientific surveying is fun. After one year of almost daily visits to the same stretches of shore, I’ve spotted trends in the types of litter, and wanted to share and compare them with others. It stimulates action and keeps things interesting. The group is only a year old and being asked to take part in such a big study (by an experienced group I admire and follow) gave us validation. It’s an opportunity to learn and expand.

What have you learned from the Anchor Group training days?

Society Zero: I have learned so much from the Upstream Battle training team and sharing ideas and knowledge amongst the other Anchor Groups about projects and initiatives has been inspiring. It has really opened my eyes to the social and behaviour issues that lead to litter in the first place.

Understanding how litter gets out there has really increased my awareness of the issue that we hope to tackle. Our active participation in the citizen science and litter surveys has highlighted some important issues and will go towards creating a broader picture of the rubbish problem in Glasgow. The 'Shifting Normal Framework' has also taught us which is the best design for our campaigns, in order to have a positive impact and change for the better.

Friends of Dumbarton Foreshore: I like the idea of thinking of littering as a behaviour, not dividing people into “bad” or “good”; it’s a more constructive approach. We all do good and bad things; often misinformation, lack of engagement or misunderstanding are labelled as “bad”.

I’ve also had a better chance to learn more about the other groups. The other Upstream Battlers are an inspiring mix of scientific expertise and hands-on experience. 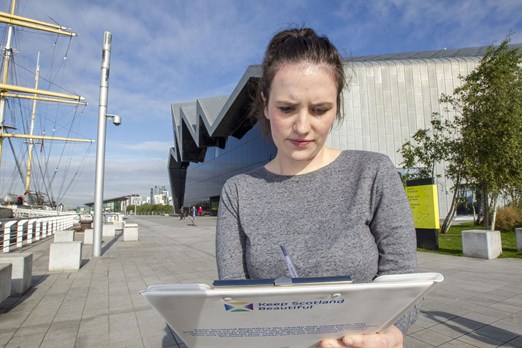 How will you put your Upstream Battle message to your community?

Society Zero: We hope to give insight and initiatives to our whole community of how they can get involved with litter picking and spreading the message of reducing our consumption at source. We are seriously considering Kate’s Silent Disco litter pick idea to engage those who might be littering to get involved in a fun activity, meet others and clean up the area they live in at the same time!

Friends of Dumbarton Foreshore: Our local slant is that, for many decades, the Clyde shore here by Dumbarton Rock was the holiday destination for local families. With stunning views, rich wildlife and incredible history, there was no need to travel further. Locals tell me Dads would come down early to reserve a spot for their family on the sand! We seek to bring back that pride and protectiveness of the shore’s value. It won’t be hard, as the reaction from the public so far is one of heartfelt approval.

Ideas going forward are a Banksy-style pop-up art installation made from shore litter, a charm offensive asking local shops to stop using balloons in outside signage displays, and some other surprises we’re keeping up our sleeves!

Why should people get involved in the Upstream Battle to stop marine litter at the source?

Society Zero: We believe that everyone should get involved in the Upstream Battle to stop marine litter at source, so that they as individuals and communities can become more aware of how they can reduce their waste at source.  It’s everything that we at Society Zero are all about

Friends of Dumbarton Foreshore: Why should people get involved? We know that our oceans face unprecedented environmental assault; our very survival depends on turning off the plastic tap before our seas, our rivers, and even our bodies, are irreversibly polluted.